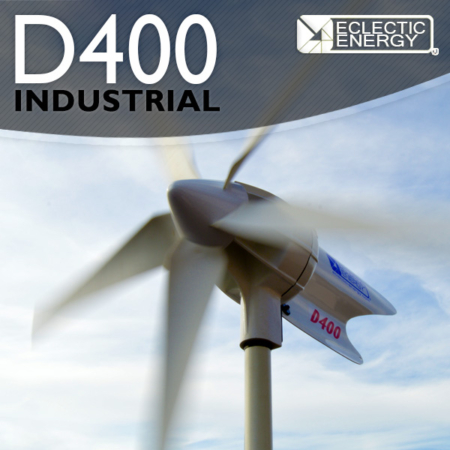 The D400 is a direct – drive wind generator, designed for a variety of marine and terrestrial applications. It is exceptionally quiet and vibration-free in operation.

This innovative machine is extremely efficient in low wind speeds, yet is cable of sustained power outputs over 500 watts in higher winds. Distinctive and elegant in design, the D400 is superbly engineered for long, trouble- free service.

All performance figures are indicative. Actual outputs may vary. E&OE

When mounting on a yacht or boat, positioning the turbine will be influenced by the configuration of the boat and other equipment fitted. It is important to ensure that the blades are at sufficient height such that injury to the crew from rotating blades is unlikely.

A minimum height of the lowest point of the blades above a crewed area should be 2.4 metres. Also ensure that no part of the turbine can come into contact with any other part of the boat’s fittings or rigging. Because the turbine is subject to dynamic loads when the yacht is in a seaway in addition to wind loads, the tower should be securely braced or guyed both fore and aft and athwart ships. The bracing struts or wires should be firmly attached to the main tower at a point 200 –300 mm below the lowest point of the blades.

The D400 is an inherently quiet and low vibration machine. However, certain applications may benefit from the introduction of anti-vibration mounts under the main tower and bracing struts. Note that, on a yacht or boat, no unsupported tower should exceed 2.5 metres in length. The wind loading on the D400’s rotor disc can exceed 50 kg, so any tower structure should be designed to allow for a safe working lateral load of 70 kg at the hub height of the turbine.

The D400 is extremely efficient by design, making it the most powerful and productive wind generator of its rotor size currently available.

The D400 should perform in line with, or exceed, the values given in the output graph. When verifying system performance, it is important that wind speed measurements are taken at the same height as the turbine – do not rely on the wind speed reading of a masthead anemometer, it can be TWICE the speed of the wind at the turbine.

Note that the batteries should be at least 40% discharged.

Note also that if a regulator is installed as part of the system, dumped output will not be seen by shunt-sensed battery monitors.

Should outputs be well below expectations, first suspect turbulence in the wind stream.

Turbulence at a given site can be specific to a particular wind direction where it is caused by an obstruction either up or downwind of the turbine. When the wind direction changes,and the obstruction is no longer in line with the turbine, outputs may return to expected levels. If the turbulent wind stream is not from the prevailing wind direction, this may not be important. Alternatively, the D400 could be re-sited or raised in height.

If poor output cannot be attributed to site conditions, re-check the whole installation against the wiring diagram and also look for poor or loose connections.

Note, where batteries are in a good state of charge, power diverted by the regulator to the dump resistors will not be seen by the battery monitor.

Finally, ensure that the battery bank is in good condition. Check individual battery terminal voltages within the bank. Defective cells within a battery bank are a common cause of poor charging performance.

Note that there is a short period of ‘running in’ with a new wind turbine. The bearings and shaft seals of a new machine take 40 – 50 hours of operation before mechanical friction falls to its design level. As a result, your D400 may seem a little slow to respond in light winds until this ‘running in’ period has passed.

Before deciding that your D400 is faulty, please work through the troubleshooting guide on page 16. In our experience the vast majority of problems reported prove to be faults in the installation rather than a problem with the turbine itself.

Please feel free to contact us if you require additional advice or guidance.

*All performance figures are indicative. Actual outputs may vary. E&OE.